The Boxer Rescue
We are a group of volunteers, dedicated to finding loving forever homes for unwanted, abandoned, and surrendered Boxers. Our rescue works within Massachusetts, Maine, Rhode Island, Connecticut, and New Hampshire. We strive to not only save boxers, but to educate the public about responsible dog ownership, the importance of spaying and neutering, and how to best meet the needs of this amazing breed.
AdopteesMake a Donation

The Boxer Rescue, Inc. is a 501(c)3 non-profit organization serving the New England area.  Our group is made up of dedicated volunteers. These are the people who care for the homeless, abused and unwanted boxers because they have a love and passion for the breed and believe they all deserve a second chance.

The Boxer Rescue could not exist without donations from people like you. Many of our dogs coming into rescue require expensive medical treatment before they can be placed in their “forever” homes. The adoption donation is often not sufficient to cover all of the expenses.   Since The Boxer Rescue is solely operated on a volunteer basis, funding is always tight; therefore, your donation small or large will go a long way in helping our dogs in need.

Get Ready To Snuggle 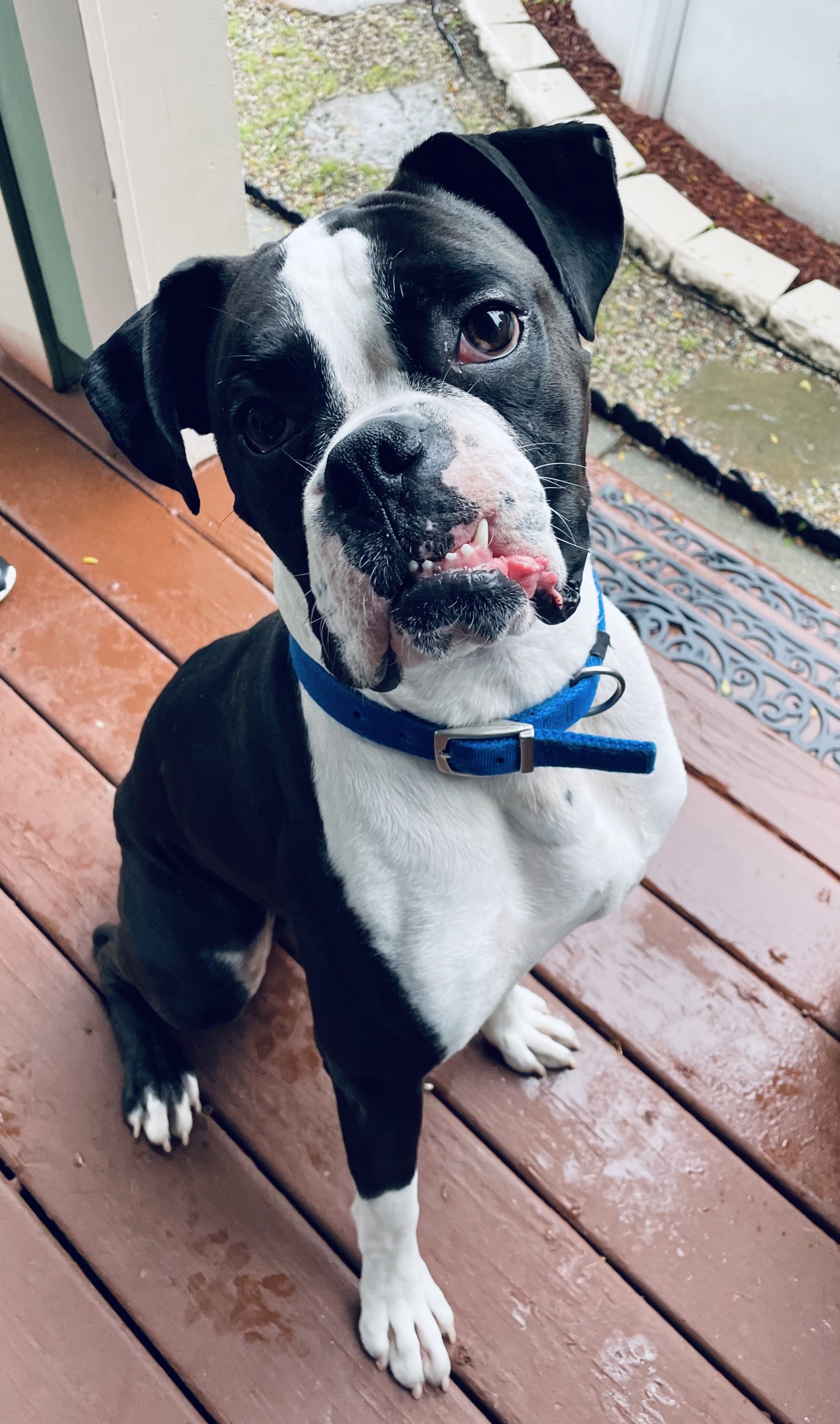 FOSTER OR FOSTER TO ADOPT HOME NEEDED FOR TYSON

This afternoon (10/1), two of our volunteers went to meet 2 year old Tyson at his home. He has a very intimidating bark, and A LOT of energy. A LOT. He is very easily overstimulated and doesn't know what to do with himself. He jumped up, relentlessly, on one of our volunteers and she just ignored him. Eventually, she was able to distract him with a chew toy and he was happy to gnaw on it while she held it in her hand. They took him for a walk around the block using a front pull harness and he did pretty well for his first time sporting a new walking "tool". He was easily redirected when he encountered other people passing by.

After meeting Tyson it is clear that he is not a dog for just anyone who thinks he's cute. Tyson has seen 4 homes in his short life. He is under socialized and easily over stimulated. It's the perfect storm for the behaviors his current home is seeing (the biting of hands, the inability to calm down, etc).  They have used tools on Tyson that have likely caused him to take some steps backwards and have exacerbated existing issues. We don't fault them... They were doing what they were told by a trainer and what they thought was right. Tyson needs that one in a million home. He needs a strong, confident human, who will not give up when the going gets tough. He needs a quiet, calm household. Chaos and crazy make him crazy. He needs someone with big dog experience. Someone with a willingness to tackle his training needs and give 100% toward getting this boy on track. He needs a lot of positivity and reward based training, with a side of "I'm not going to take your sh*%" .

He needs exercise, both physical and mental. A walk a day will not cut it. He needs more.

Tyson will THRIVE in the right home. He will fail in the wrong home. We HAVE to make sure he is placed where he will be successful.

He will be placed as an only pet, as all attention needs to be focused on him and getting him to be the best version of himself. Someday, it would be great to be able to properly introduce him to another dog, but he's not there yet.

He will not be placed with kids.

He is not a "city" dog. A quieter setting would be best for him.

Tyson is NOT NEUTERED. That will be done once a home is secured.

Tyson has so much potential. He is a snuggle bug and loves his humans. He just needs a chance, and we might be his last one.

If you have experience with boxers, and can devote the time and attention to Tyson, please apply. 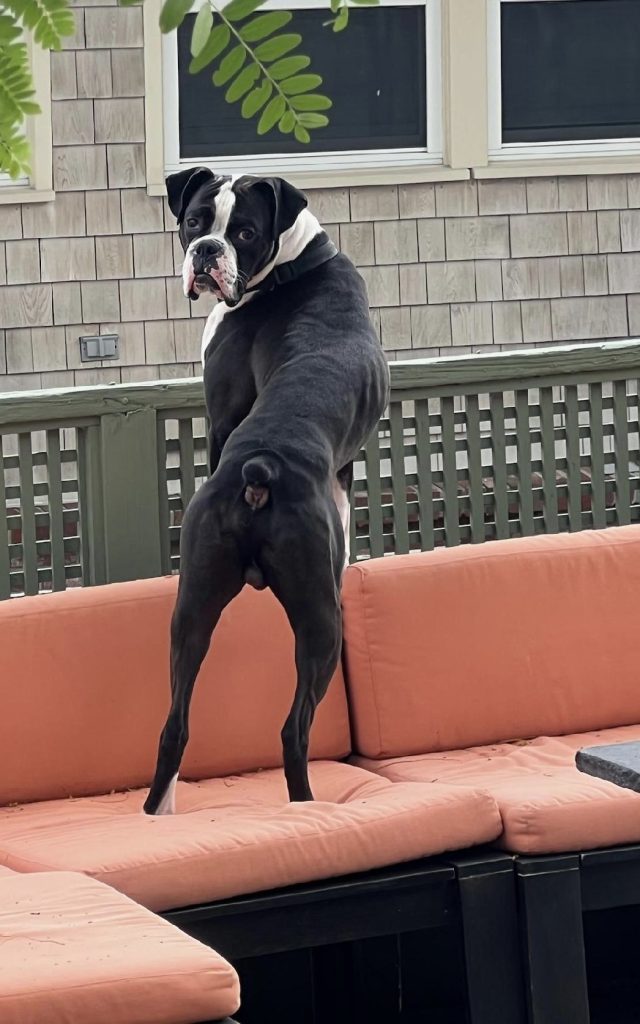 How Do I Adopt My Boxer?

We often have many beautiful boxers in need of forever homes. From puppies to seniors, they all deserve their happily ever after. Keep an open mind and an open heart, and you just might find your best friend.

Foster homes are a critical piece of our rescue puzzle and enable us to learn as much as we can about the boxers that come to us before being placed in forever homes.

We are always in need of volunteers. Do as little or as much as you want to help us, help them.

In order to continue to save the lives of beautiful boxers, we need funding help from the public. Please consider making a tax deductible donation in honor of your love for the breed.

Our goal is to promote responsible dog ownership, provide support to boxer owners, inform the public about the needs, qualities and characteristics of the boxer breed, and to be a positive presence in the boxer rescue community.

If you would like to help The Boxer Rescue, please consider making a monetary donation.  The Boxer Rescue, Inc. is a 501(c) 3 non-profit organization and all donations are tax deductible. No donation is ever too small to help a boxer dog in need.

Why Two Female Dogs May Not Be the Best Combination

If you find yourself considering this sort of same-sex adoption scenario, think again. As cute and playful same-sex sibling puppies are, chances are that once they mature, they will engage in some serious discussions that could turn bloody.

Is the boxer the right breed for you?

Boxers are forever puppies.  They seem to never to “grow up”. So be prepared to deal with puppy behavior until they are around 3-4 years old.  They require a lot of exercise and stimulation.  Multiple long walks a day will help tire them out, and we all know that a “tired boxer is a good boxer”.